Tom Fitzpatrick Solo Performer And Band Is Perfect For 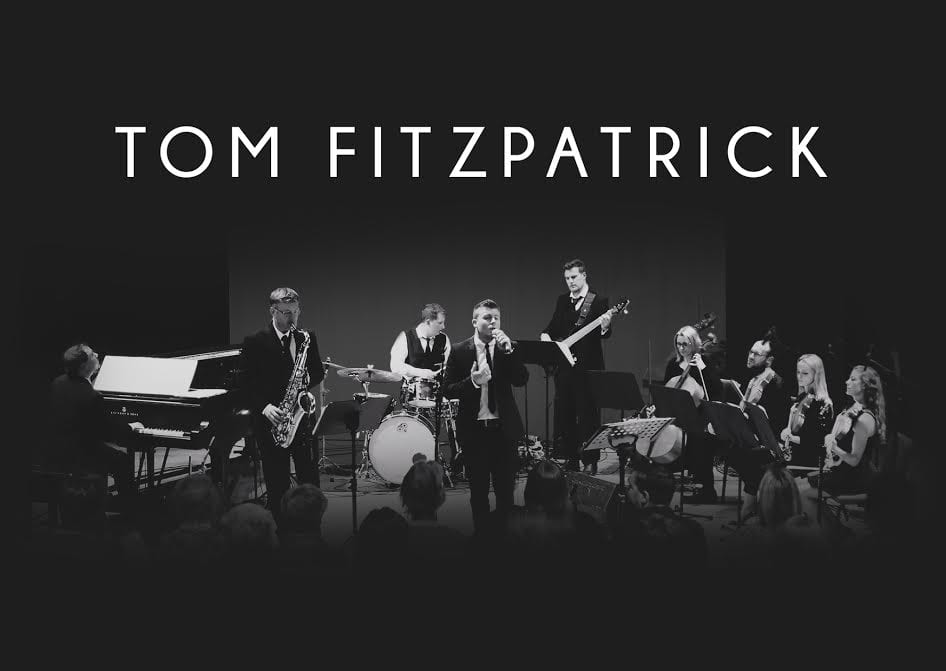 About
Line-Up
Playlist
Reviews
Clients
FAQs
Performance
About
Tom Fitzpatrick is highly recognised as one of the UK’s most exciting Swing/ Jazz and Big Band singers out there. With a huge range both in scale and material Tom Fitzpatricks fresh, charismatic vocal talents and energy have held him in high regard.
Tom Fitzpatrick has performed at many high profile events including, outdoor arenas, various theatres, weddings, corporate events, performing on main stages at numerous festivals and two spots on Broadway in New York City.
On occasions, Tom has performed at private functions in front of Celebrity V.I.P guests. In 2013, He won the “Young Entrepreneur of the Year” Business Award for his rising success in the music business at such a young age!
Now as a sought after guest vocalist in the UK, the USA, and Europe. Tom Fitzpatrick has worked with The Vince Dunn Orchestra, The Algarve Jazz Orchestra in Portugal, The 75 piece Sussex youth Orchestra and The Chris Thomas Big Band in Florida USA.
Theatre Productions
In various touring theatre productions, Tom Fitzpatrick has performed alongside top West End and Broadway Stars including Ruthie Henshall, Kerry Ellis (Lead roles in We Will Rock You, Les Miserables, Wicked in the West End and Broadway) and Keith Jack (BBC’s Any Dream Will Do)
Tom Fitzpatrick has an extensive repertoire and sings a variety of material from artists such as Frank Sinatra, Dean Martin, Bobby Darin, and Michael Bublé, Nat King Cole, Jamie Cullum, Steve Wonder and many many more. Tom has a huge range both in scale and material which is sure to bring a lot of style, fun, and energy to any occasion.
Their collective credits include working with artists such as the legendary Jack Jones, Dave Stewart, Gwen Stefani, Pixie Lott, The Proclaimers, Buddy Greco, The Drifters, Freak Power and Trevor Horn to name but a few.
Some members have toured with renowned artists Bruce Forsyth, Joan Rivers and Jools Holland to name but a few – involving considerable TV work such as Strictly Come Dancing and the National Television Awards.
Tom can supply 15-20 piece orchestra and other additional services please get in touch for more information
Line-Up

You can also book Tom with the following band options:

The Tom Fitzpatrick Band have created one of the most versatile and engaging acts to hit the music scene. The band consists of some of the most sought after professional musicians in the UK.

Their collective credits include working with artists such as the legendary Shirley Bassey, Jack Jones, Dave Stewart, Gwen Stefani, Pixie Lott, The Proclaimers, Buddy Greco and The Drifters to name but a few. Some members have toured with renowned artists Bruce Forsyth, Joan Rivers and Jools Holland – involving considerable TV work such as Britain’s Got Talent, Strictly Come Dancing and the National Television Awards.

Alongside the fresh, young, charismatic vocal talents of Tom Fitzpatrick, this line-up is a force to be reckoned with.

For the past few years The Tom Fitzpatrick Band have been selling out theatre shows nationwide, and have wowed audiences across the UK and Europe.

Their extensive repertoire of legendary swing tunes interspersed with unique versions of modern classics gives the band their distinctive sound, also their young & hip style of Jazz, Swing and Big Band tunes has them in constant high demand with both public and private clients.

I would thoroughly recommend Tom to all that want a class act that is so enjoyable to listen to. Tom performed at my daughter Naomi and Chris’s engagement party Saturday 26/01/19 and boy oh boy I was not disappointed. From the ease of booking to contract to sign, all my questions answered promptly and my demands were fully met. Tom is what I would call a genuine young man with impeccable manners.

Tom entertained all the guests from the very old (85) to the youngest (5) who all got involved with swaying and then filling the dance floor up which he didn’t mind at all. All of this just turned our evening into an extra special event which was personal to just us with an exceptional singer
I can honestly say Tom you were fabulous and I can’t wait to see you again soon.

Tom Fitzpatrick Solo Performer And Band Is Perfect For