The UB40 Experience – An Amazing Tribute Band To UB40

The UB40 Experience Are Ideal For 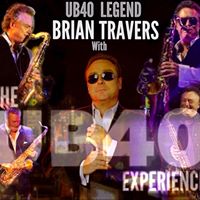 The UB40 Experience was founded in late 2013  by  Andy Bagnali Stars In Your Eyes Grand Finalist. and Anthony Pants Porter along side some hand picked top class musicians

Each member of the band has studied the playing techniques, style and sounds of the members of UB40 which they represent so that the real UB40 sound and feel is captured in the overall performance.

The UB40 Experience have had many special guests over the years including UB40’s Brian Travers, Laurence Parry and Tony Mullins in addition to members of Steel Pulse, The Specials , The Selector  plus other top name bands.

The UB40 Experience has appeared on ‘Come dine with me ‘ on channel 4 and have also played along side , Aswad , Musical youth, Sonia , Go West . Chesney Hawkes , Living in a box , The beat , to name but a few .

The UB40 Experience – Performing UB40 Hits Such As:

The Way You Do The Things You Do

Bring Me Your Cup

Falling In Love With You

Where Did I Wrong

I Got You Babe

And Many Many More….

The story of UB40, and how this group of young friends from Birmingham transcended their working-class origins to become the world’s most successful reggae band is not the stuff of fairytales as might be imagined. The group’s led a charmed life in many respects it’s true, but it’s been a long haul since the days they’d meet up in the bars and clubs around Moseley, and some of them had to scrape by on less than £8 a week unemployment benefit. The choice was simple if you’d left school early. You could either work in one of the local factories, like Robin Campbell did, or scuffle along aimlessly whilst waiting for something else to happen.

By the summer of 1978, something else did happen, and the nucleus of UB40 began rehearsing in a local basement. Robin’s younger brother Ali, Earl Falconer, Brian Travers and James Brown all knew each other from Moseley School of Art, whilst Norman Hassan had been a friend of Ali’s since school. Initially, they thought of themselves as a “jazz-dub-reggae” band, but by the time Robin was persuaded to join and they’d recruited Michael Virtue and Astro – who’d learnt his craft with Birmingham sound-system Duke Alloy. T

he group had already aligned themselves to left-wing political ideals and forged their own identity, separate from the many punk and Two Tone outfits around at that time. The group had nailed their colours to the mast by naming themselves after an unemployment benefit form. Their political convictions hadn’t been gleaned second hand either, but cemented in place whilst attending marches protesting against the National Front, or rallies organised by Rock Against Racism.

By the time Chrissie Hynde invited them to tour with the Pretenders during the summer of 1980 and their debut single “King b/w Food For Thought” had sailed into the UK Top 5, all the essential elements of UB40 were already in place. Their line-up will remain unchanged for almost thirty years, and they will continue playing a mix of original material and inspired choice of reggae covers in a style that’s instantly accessible with its bright melodies and sweeping horn arrangements – one that’s allied to a formidable rhythm section, capable of holding its own with anything from Jamaica.

UB40’s first album was released the following September, on Graduate Records. Their deal allowed them more creative freedom than if they had signed with a major label. The cover artwork memorably duplicated an unemployment benefit card, with the title “Signing Off” rubber-stamped in red, but it was the music that quickly worked its way into the affections of a young, mainly student crowd with its knowing lyrics, solid reggae rhythms and dubby, instrumental passages, offset by warm horn s olos and Jamaican style scatting. There was nothing else like it at the time.

As a multi-cultural band from Birmingham, UB40 weren’t drawn into trying to sound “authentic,” and there was considerably more depth to their music than that of many punk and 2Tone bands. “I’m a British subject, not proud of it, whilst I carry the burden of shame,” they sang on one of the tracks. Accepting the truth of their own situation amidst a sea of other reggae songs proclaiming black heritage gave us a valuable insight into where UB40 were coming from. They were unafraid to stand up and be counted, and British audiences instinctively loved them for it. “Signing Off” duly went to No. 2 in the UK and stayed on the nation’s album charts for 72 weeks.

At the onset of the nineties, Robert Palmer duetted with them on their next UK Top 10 hit, “I’ll Be Your Baby Tonight,” and 808 State charted with a remix of “One In Ten.” Highlights such as these, whilst welcome, were then dwarfed by the release of “Promises and Lies” which became the group’s biggest selling album, selling in excess of nine million copies worldwide. The biggest hit from “Promises And Lies” was “Can’t Help Falling In Love”, which brought the band their third UK No. 1 and would remain a favourite on American radio stations for years – especially after its inclusion on the soundtrack of the 1993 Sharon Stone film “Sliver.”

On the 25th anniversary of their recording debut, the band released “Who You Fighting For.” Acclaimed not only as a return to form, but also an artistic triumph,” Who You Fighting For” was distinguished by UB40’s decision to record once more as “a live” band – i.e., playing all together in the studio. Its success was aided by a clutch of powerful message songs that wouldn’t have sounded at all out of place on their first few albums.

The questioning of authority (including Britain and America’s decision to invade Iraq) and steadfast allegiance to working-class values was there for all to see, and yet the Grammy nominated “Who You Fighting For” also contained its fair share of love songs, such as “One Woman Man,” “Kiss And Say Goodbye” and a winning cover of Matumbi’s “After Tonight.”

Do you want to know more about UB40 Take a look courtesy of Wikipedia https://en.wikipedia.org/wiki/UB40

Would you like to take a look at our other tribute bands https://m8entertainments.com/category/popular-music-bands/tribute-bands

The UB40 Experience Are Ideal For

Went to see these guys at a festival amazing band and very professional. Well done guys