The Amazing Magician Of Iain Shaw

The Magic Of Iain Shaw Is Ideal for 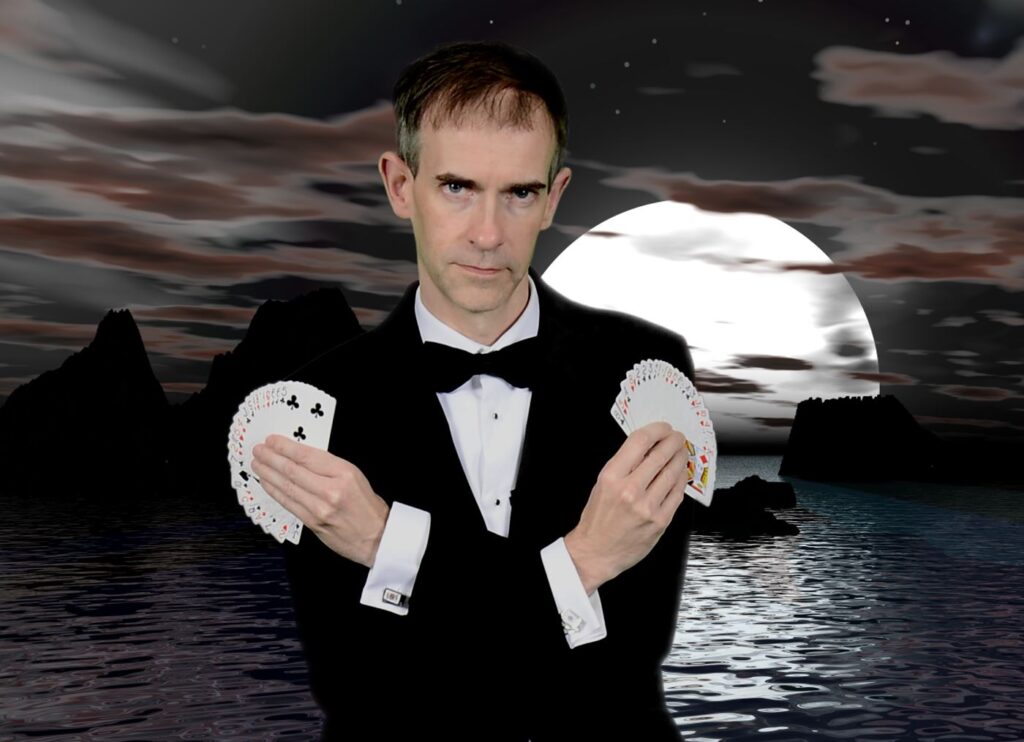 The Amazing Magician Of Iain Shaw

The Magician Of Iain Shaw

Magician Of Iain Shaw has been performing for 25 years, Iain Shaw has captivated audiences around the world, with his stunning magic shows. Iain creates elaborate and thrilling tricks with mind blowing predictions, which leave people totally mystified and thirsty for more. Whilst incorporating humour and comedy into his act, he has entertained people of all ages and all nationalities.

Magician Of Iain Shaw has the quick wit and charm ensure his audience glow with smiles and roar with laughter. Iain’s shows feature clever conjuring, a slick sleight of hand and an element of danger, which deliver the ultimate entertainment experience. As well as his stage show, Iain performs close-up magic, and particularly enjoys seeing the sparkle in the eyes of those who are amazed by the seemingly impossible.

Since the age of 5, magic and illusion have always been Magician of Iain’s Shaw passion. During his career as a magician, he has worked in theatre, on TV and has many years’ experience performing and directing his own stage shows on cruise ships. Iain started working on cruise ships when he was 20 years old, producing outstanding performances for the world’s top cruise lines.

Iain is a solo Magician.

Magic of Iain Shaw – Close-Up / – Comedy Cabaret Magician – Sheffield, Yorkshire and the Humber Event Location: Asquith Primary School, MansfieldEvent Type: Children’s Magic Show 6th December 2019 Iain was excellent, the children thoroughly enjoyed it and were so excited. Our children don’t get taken to shows of any kind so seeing live entertainment is really special for them. Staff have all commented how good Iain was and how it all ‘worked’ whether the children were 3 or 11!! Certainly value for money. We are very grateful. Reviewed by: Clare Harding – Headteacher

Magic of Iain Shaw – Close-Up / – Comedy Cabaret Magician – Sheffield, Yorkshire and the Humber Event Location: Showcase in EssexEvent Type: Showcase Event 25th September 2019 The Magic of Iain Shaw gave this showcase session the shot in the arm it needed, with a terrific comedy patter and magic spot. The true and assured look of the total professional. Reviewed by: Mark Ritchie UK Cabaret Magazine.

“Thank you so much for so many enjoyable and totally baffling exhibitions of your magic. Not only are the illusions magnificent, but the style and inventiveness of your show is spectacular. ”

“You’re such a class act, Iain! Truly one of a kind. A great, fun show for all, which is very clever and entertaining.”

Iain has been a Magician for 25 years, performing to audiences of all ages worldwide. He has been on TV with Peter Kay and in theatre with celebrities such as Cannon and Ball.

Whatever the occasion to celebrate, The Magic of Iain Shaw has a show for you!. Parties for adults with magic and close-up to mystify you and your guests. Children’s parties with different packages including magic, music and games to entertain a younger audience.

A wide range of options from a full cabaret show to mix and mingle table magic. Recent corporate events include a Children’s Party for Tesco and a New Year’s Eve show to an international audience at a 5 Star Resort in Cyprus.

Wedding / Close Up Magician… The Magician Of Iain Shaw

Make your special day the very best with the ultimate entertainment package for any wedding. Tailor Made to your requirements.

From a couple of hours close up magic to whole day packages, including the option of a hilarious Mr & Mrs Game Show, which will entertain your guests for hours!

A show specifically aimed at children, which incorporates plenty of magic and amusement for all. This can be performed at any size venue: homes; clubs; schools; playgroups; cruise ships etc. The show is also a great addition to any Christmas Fair or end of school term party! Iain is hilarious and extraordinary.

The Magic Of Iain Shaw Is Ideal for