The Funtime Frankies Wedding Party Band Is Ideal For 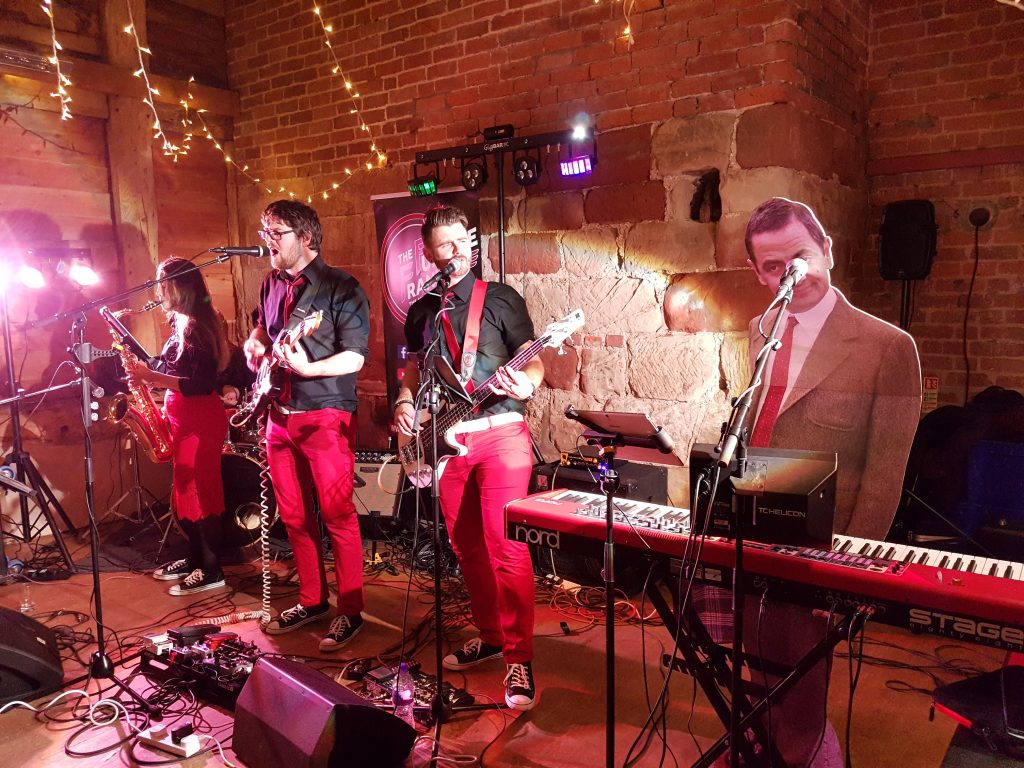 The Funtime Frankies – The Awesome Multi-Award Winning Party and Wedding Band! As Twice National winners of The Wedding Industry Awards Best Band for 2018 & 2017 and NW Regional Winner for 2015, you can be sure of the most awesome night for your event.

Firm favourite of many corporate clients including Toyota, Amazon UK & TUI, this fully live band provides an unforgettable show for your guests. Pure live energy from highly talented musicians and great performers, they have been packing dancefloors since 2005. No shoe-gazers allowed in this outfit!

Alongside the onstage madness, you can be assured of professionalism from the time you book through to your event itself. The band can provide a package to suit your needs. Performing that special song on the day.

Shall We Meet some Of The Funtime Frankies Band?

On 25th October, 1415, Max Mcgowan ensured he’d enter the history books forever by pretending to be King Henry V and winning the Battle of Agincourt pretty casually. More recently, he’s been winning glory by writing songs with his excellent band Oya Paya, and being terrible at all videogames.

An English-born inventor, scientist, and engineer, inventing by the age of 12, he helped run his family’s mill until his later successes with telecommunication devices and his work with the at-the-time newly discovered electricity. A genius by any measure.

The original villain of the 1996 Westwood Studios game Command and Conquer, Josh ‘Kane’ Stokes is a very popular character with enduring legacy and influence. Portrayed by his exact likeness Joseph D. Kucan in the games, the world does not expect that in reality Josh is growing the Brotherhood of Nod each day… And soon they shall rise.

Lone survivor of the tragic incident on the small moon of LV-426, Conall is the only man alive who can tell us what happened aboard the Nostromo. Instead he refuses to speak of the event, and sticks to playing his guitar extremely well. Works for us.

Nic is widely held to be one of the greatest professional wrestlers in history. Known by the nicknames “Heartbreak Kid”, “The Showstopper”, and “Mr. WrestleMania”, when this Four-Time World Champion shows up at your event and tunes up the band, the next two hours will just be Sweet Chin Music, Guaranteed.

Yes, Andy Warhol’s famous muse is also a guitarist for the greatest party band around! You’ll recognise him instantly from the famous artwork, his label’s still in perfect condition and his body is barely even weathered from the time spent in the coolest cupboard of the 60’s.

Retired fighter ace Wing Commander Simpson flew Hurricanes during the Battle of Britain with heroic excellence, and won many victories. Long after retiring, he now shares his love of travel with his new award-winning television show ‘Where in the World Is Alasdair Simpson?’

Part man, part machine, all cop. Officer Jack Taylor is the newest tool in crime fighting. Tough, uncompromising and armed to the teeth, with his sweet skills and advanced targeting, Jack says ‘it’s your move, creep’.

A diminutive halfling with a love of food, beer and nature, Dave’s life was shaken up the day he was assigned the task of delivering the One Ring to the fires of Mount Doom in Mordor to destroy it. Happily, he succeeded in his mission and has only the very mildest of PTSD to show for it. Yay!

Tired of the relentless attacks of the giant Kaiju monsters on his home of Neo-Tokyo, Steve Leggett joined the Mobile Armoured Suit Corps in 2784, and quickly rose through the ranks to become one of the greatest monster slayers in history. Tireless heroism like this is truly inspiring, Thanks, Steve.

King of ancient Macedonia, Alexander the Great’s legacy could fill a pint glass many times over. A truly titanic figure of legend, much of what he became is shrouded in myth, but we know the truth, and it’s big. Playing for you, at your venue, at your event. History. Made. Real.

Welsh Dragons, known as fire breathing lizards, are proud, majestic, powerful and beautiful. All of this applies to Tomos, who is one of the most reliable, talented and handsome guys you could hope to have at your event.

Let’s face it. You like trumpets. Everyone like trumpets. Adam plays trumpets. As many of them as you want. Simultaneously. He’s so good at it he invented the Bidgood Pattern Trumpet, which is part trumpet, part Honda Civic, all awesome.

A princess from a far-off land who sings to birds and other animals, and lives in a tower. Many say she has magical powers, and that she spontaneously bursts out into catchy musical theatre songs several times a day. Maybe that’s true, but one thing we can confirm is that is she is drawn and animated by talented professionals.

The finest bikini model in all of history, Jamie’s legs are legendary. Sadly, his career in bikini modelling was cut short during a ‘He’s obviously a bloke who plays sax’ accident, and he switched to his other talent which was Saxophone, much to the celebration of the rest of us.

You guys should have been at our wedding tonight, can’t wait for next year and what wonderful people you are for catering for our new date. Much love and highly recommended Thankyou so much The  Funtime Frankies

Omg the best band I have ever heard.  The Funtime Frankies  was that good I didn’t sit down all night (robi and lucy wedding) they played the best songs ever, even the hubster danced (got to be seen to believe) , definitely would recommend.

Absolutely amazing, Sam did an amazing set for the ceremony made the day extra special and the band at night were fantastic got everyone up on the dance floor and made the night one too remember.

Great evening at the Griffins wedding! with The  Funtime Frankies!

At our Christmas party 4 of them played a 2 hour set straight through. All well known songs, all the favourites. Will be booking them again – highly recommended! Thankyou to you guys The Funtime Frankies

And Many Many More

Do they have different line ups?

The Funtime Frankies Wedding Party Band Is Ideal For