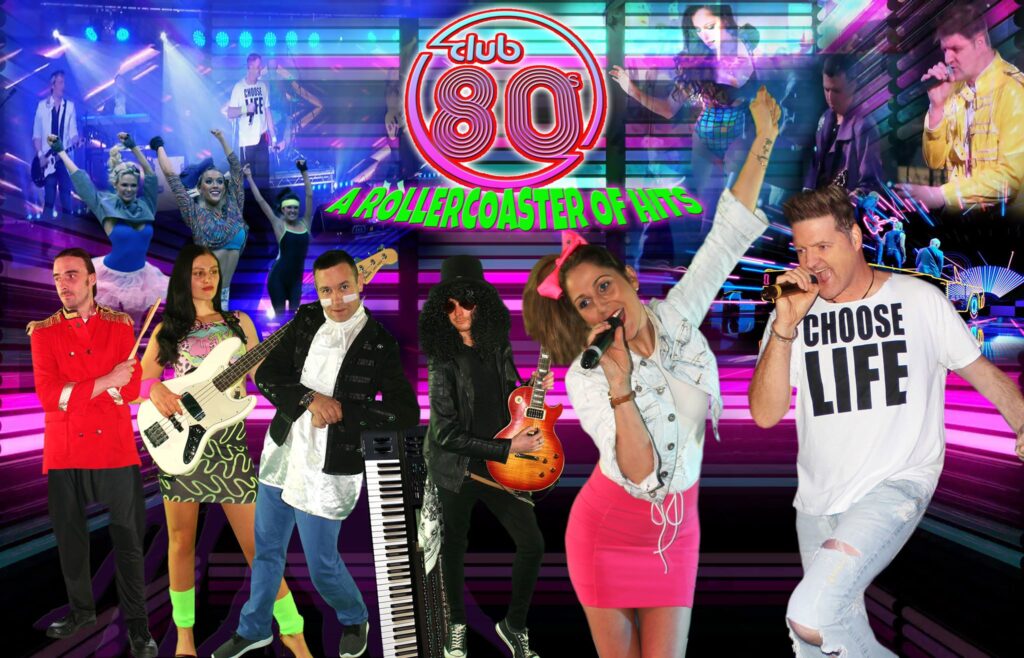 The Club 80’s Live show will take you on a rollercoaster ride back through one of the greatest era’s of music, going back to the 80’s with hits from all your favourite artistes. The show is complimented with a great sound and light show with big screen visuals. The show features a live band, dancers and 2 of the best singers you will see rounding off a full complete show that will leave you wanting more.

Marc Andrew has the ability to change his voice to sound like pretty much anyone he replicates. With a great range in his voice.

Tackling A Ha, Bon Jovi and Guns & Roses effortlessly. Marc has a wealth of experience entertaining crowds and has done so throughout the world with Show group Splash.  He is ready to take you on his journey

Alana has been performing since the age of 4 and has an energetic stage presence that you would expect in a show like this. She also has a professional Dacning background that is useful in a show full of great amazing dances from Maddonna and Whitney Houston.

This Chick is ready to Party……Are You

Hank Gee is the youngest member of the band at 23 he has already toured around the UK Playing at Weddings and Holiday Parks and can play any style from Pop to Rock. Although he was not born in the 80’s he knows the music so well..

Ashlee Has trained at some of the best schools in the country and has become a versatile dancer. Being able to turn to any style of dancing from Ballet to Contemporary allows the show in our 80s set to stand out from others.

Fav 80’s Song – Whitney Houston – I Wanna Dance With Somebody

Paul Mooney started his professional career depping for bands throughout the world and has a knack for creating the sounds most like the originals. He is also a great singer and helps with all the Backing Vocals and programming to create a stunning likeness to the originals.

Iain Duncan is both a Recording and Live Drummer which makes the ideal candidate for this type of show. Iain has studied his art and playing in bands has taking him all over the world. He has an amazing ability of learning new styles quickly and so well.

Michelle has trained in dance from the age of 6 and has danced in many shows throughout the world on cruises, variety clubs and holiday parks. She has a passion for attention to detail and puts that into her dancing every time

Lots of good memories of when I was younger band was a class 110% brilliant will definitely come see yous again thanks guys.

We Certainly do, We want you to expereince the 80’s as well and we would love to see you dress up in 80’s outfits as well