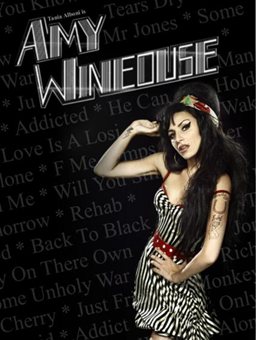 Tania Alboni has a special passion for this tribute as she is impersonating one of her favourite singers of all time and it shows in her performance. She has perfected the unique style and sound that Amy is so famous for.

Tania Alboni has been a professional singer since 1997.
She began her career in a Commitments tribute band where she sang both lead and backing vocals.

Tania has always had the ability to mimic voices since childhood, she used this talent to start a career in the tribute world, starting with her uncanny impersonation of Cher which still takes her across the globe to this day, performing in front of thousands alongside artistes such as Marc Almond, The Venga Boys, Heather Small & Beverly Knight. She was also part of the Variety Show Of Dubai with Tom O’Connor.

Tania, using her uniquely adaptable voice then added a variety of impersonations to her show, beginning with country rock legend Shania Twain. This then lead on to the soft melodic vocals of Karen Carpenter, The distinctive brit pop vocals of Sophie Ellis Bextor, The beautiful harmonies of ABBA, The intensive Latino flavour of Shakira and finally the vocal Tania is most highly acclaimed  for, the gut wrenching soulful vocals of Amy Winehouse. This has taken Tania around the world and back again, performing on numerous TV shows, advertising campaigns, newspapers, magazines.

In July 1999 Darren & Tania met for the first time, performing as Simply Red and Cher alongside Meatloaf and Tina Turner for a corporate function at Nissan motors, Sunderland and have been together every since.
They started the “Simply Red and Cher show” later that year, and added more and more acts over the years to finally
Made “The Ultimate Tribute Show” which is now available to book.

Performing great hits such as Back To Black, You Know I’m No Good, Rehab, Love Is  A Losing Game, Tears Dry On Their Own, Valerie, Stronger Than Me, Me & Mr Jones, Wake Up Alone, Take The Box, In My Bed, Monkey Man, What Is It About Men, Hey Little Rich Girl  Based in the London area

For a number years Tania  has been working alongside her songwriter/producer husband Darren Alboni, laying down lead vocals on his extensive catalogue of original tracks and also providing backing vocals for his other artists.

In 2012 Tania discovered she too had a penchant for song writing and began work on what was to be her debut single as an original artist.

“Mr Lazy Good For Nothing” was released on iTunes in the summer of that year and became a firm favourite amongst North-West England’s gay club scene. The song shows off Tania’s powerful and soulful vocals, and along with her female empowering lyrics and feel, her style often draws comparisons to songs and artists from the 90’s club classics era.

Later that year Tania Alboni was also approached by top Ministry of Sound DJ and Producer Lee Osborne to collaborate on a trance track Lee had musically produced and written previously. Tania then wrote the melodies and Darren wrote the lyrics. by request of Lee, Tania adapted her vocals to make them soft and haunting to fit in with the trance style. The track “Pirouette” has been taken on by a dance label and to be released early 2013.

Klone records were recording a Forever Bond album and were waiting for the release of “Skyfall.”

Adele released the song at 12.03 am on a Saturday morning. by the following afternoon Tania had recorded the full song and sent it over to the producer to finalise the track to make the deadline.

Our Amy Winehouse tribute act “Tania As Amy” is a well known act throughout the world of entertainment as one of the best soundalikes to the one and only Amy Winehouse. In July 2007.

Tania began her unique and authentic tribute to the multi-award winning vocalist Amy Winehouse, not only whipping up a frenzy in her home country (UK), but also taking the rest of the world by storm!

Not content with only perfecting that unique vocal style and sound that Amy has since become infamous for, she believes that every head tilt, skirt flick and even the hair twirling has to be spot on! Every detail has been studied with such accuracy that this isn’t just a vocal performance. This has become the full Amy Winehouse experience!

Tania As Amy is still the UK’s number 1 tribute to the jazz legend. Our Amy Winehouse tribute act perfected the mannerisms and the unique sound of Amy Winehouse and that is what makes our Amy Winehouse Tribute better than all the rest.

Our Amy Winehouse Tribute Show includes all Amy’s hit songs including Rehab, Back To Black, Tears Dry On Their Own & Valerie and fabulous Amy Winehouse classics from both of her multi award winning albums Frank and Back To Black.

Our extraordinary Amy Winehouse Tribute Show continues to leave audiences of all ages up & down speechless. Once you have seen the show you’ll be crawling back for more!

Tania is a solo performer. Performing as the amazing Amy Winehouse

Tribute artistes Darren and Tania Alboni presented a segment of their two hour Ultimate Tribute Show, with a glimpse of their Amy Winehouse and Mick Hucknall impressions. If this rest of the show is up to this standard, then surely lucrative cruise ship work would seem to be assured. The vocal quality and the sincerity of the impressions will surely make this a superior addition to the tribute market. The sound-alike quality – in particular the Mick Hucknall – impression was quite stunningly accurate