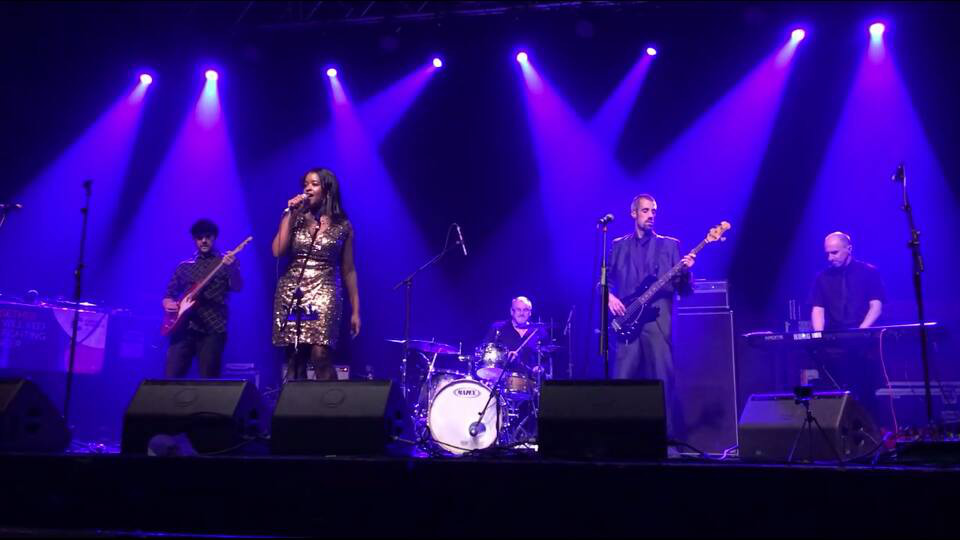 SOULvation is a Soul, Motown and Disco function band based in Manchester, playing classic songs from the 60’s through to now and guaranteed to have people singing, dancing and having a good time from the first song to the last.

They formed in 2012 and are a very experienced 5-piece band, comprising of a female lead singer, drummer and backing singer, keyboard player and backing singer, guitarist and bass player. Vocal harmonies are a vital part of so many of the songs we perform and our three singers harmonize very sweetly. Equally at home playing weddings, birthdays, parties, corporate events, pubs or clubs.

Jane is the newest member of SOULvation and has been singing since childhood, developing and expressing her voice through many different projects. From performing in various covers, tribute and originals bands to studying music as a mature student, Jane has always been drawn to the stage and studio.

With a few years on the holiday resort and cruise ship circuit as part of resident bands and duos, Jane has built a huge repertoire of songs across all decades and genres and loves nothing more than to entertain an audience.

A lover of funk, rock, blues and folk – with a favour for soul music and the great singers like Aretha Franklin and Janis Joplin – Jane is always ready to sing her heart out and enjoy every gig.

After her travels, Jane has settled in Manchester from Scotland with her new partner and looking forward to the future with SOULvation.

Kev has been playing bass over 30 years in a variety of original, cover, function and tribute bands. He was a teenage rock and heavy metal fan who discovered soul and Motown via The Commitments and Blues Brothers films, opening up a new musical world he continues to explore.

Making up half of SOULvation’s rhythm section along with Warren, they aim to have the audience moving and grooving from the start to the end of every show, with their tight and funky playing.

Paul made a welcome return to SOULvation at the start of 2019, having taken time out to establish his own home maintenance business. He has been playing piano since age 10 and has been in bands since the age of 17.

Having grown up listening to his sisters Motown records, Paul has always enjoyed the unique vibe of soul. He takes particular pride in getting the sounds required to make each song sound as authentic as possible.

He is a founder member of the progressive rock band Strangefish and has composed and performed material on all 3 of their albums.

Paul has worked in music for wellbeing at blueSCI Old Trafford where people who are struggling emotionally can use music and composition as a way of expressing themselves.  He has hosted celebration performances of this work at RNCM Manchester on Several occasions.

He worked at Seed Studios helping people to compose and record original work.

He expanded his musical vocabulary in his late teens learning rock, funk and jazz guitar styles and continues to enjoy exploring and playing chord voicings and rhythmic phrases found in soul, funk and jazz.

He is also a member of progressive rock band Strangefish and has played alongside Paul (Keyboards and Backing Vocals) for over 25 years.

Warren has been performing as a drummer for over 20 years, playing stages both small and large across the country and into Europe, in both original and covers bands.

He grew up on a steady diet of The Beatles, Byrds and Crosby, Stills and Nash before discovering soul music through Otis Redding’s incendiary Monterey Festival performance.  His aim on stage is to make sure that the groove is flowing and everyone is dancing.

New songs are being added all the time and we are happy to learn your favourite tunes.

Dancing in the Street – Martha Reeves & The Vandellas

Stand by Me – Ben E King

I Heard it Through the Grapevine – Marvin Gaye

Papa was a Rolling Stone – The Temptations

I Just Wanna Make Love to You – Etta James

Get Ready – The Temptations

Tracks of my Tears – Smokey Robinson & The Miracles

Heaven Must Have Sent You – The Elgins

Blame it on the Boogie – Jackson Five

Back to my Roots – Odyssey

Never Too Much – Luther Vandross

Locked out of Heaven – Bruno Mars

Rolling in the Deep  – Adele

Sing it Back – Moloko

We were delighted that you were able to play at our wedding. We had a fantastic day and the party was enhanced by your brilliant performance. Thank you for contributing to making our day so special. We will definitely be recommending you to all of our friends for any future events.

Thank you so much for a fantastic evening last night. All of our friends have commented on how good you were and a great time was had be all. We will definitely be recommending you. Thanks again

I would just like to say a massive thank you for a wonderful performance last Saturday. Everyone I have spoken to have been singing your praises. Julie and I cant thank you enough for helping our evening run so well. We will have no hesitation in using you and recommending yourselves to others. Once again thank you so much.

Just like to thank you all for for playing at my birthday on Saturday. Brilliant night, everybody enjoyed it, they all said what a fantastic band you are. Thank you very much.

Thank you again, you are fantastic and nearly every guest commented on how good you were. You are lovely to deal with, cannot do enough for you and I have no hesitation in recommending you x.

Do you have your own equipment?

Is your equipment fully tested?

Would you be able to learn our first dance?