Masterpiece – A Brilliant Tribute To The Temptations & Motown

Masterpiece Are Ideal For 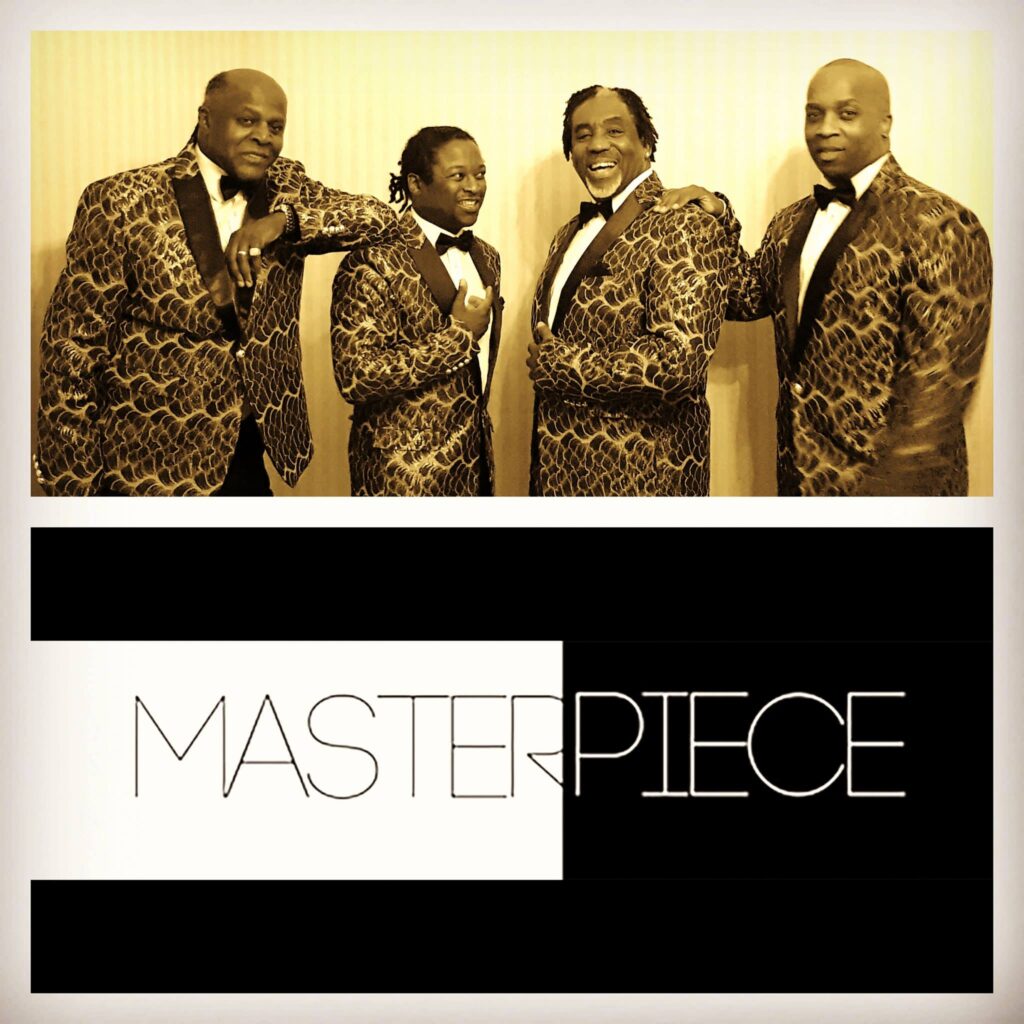 Masterpiece – A Brilliant Tribute To The Temptations & Motown

Masterpiece are a dynamic 4 man vocal group that perform a tribute to the Tamia Motown record label supergroup The Temptations. They pay homage to the Grammy award winning group by singing the majority of their chart hits including a few classic songs from other Motown Acts.
The group consists of 4 powerful individual artists who originate from the USA and UK and came together to provide an electric atmosphere whenever they perform, each with a very strong pedigree of experience within the music industry.

Masterpiece recreate the magic of yesteryear by serenading audiences worldwide with effortless reproduction of the unforgettable melodies, lyrics and harmonies along with breath taking choreography that The Temptations
made famous.

Originally from Brooklyn New York, Clyde started his musical foundation in Gospel music. He and his brother George began singing and playing guitar at the age of 5 in the ‘Gospel Wings’ a group founded by his father.
Later on Clyde joined ‘The Joneses’ a soul group which enjoyed ten number 1 hits in America.

Bill Pinkney’s ‘Drifters’ soon asked Clyde to join them to which he stayed with then for a number of years.
While singing with The Joneses and Bill’s ‘Drifters’ Clyde shared the stage with legendary artists like The Coasters, The Platters, The Flamingos, Aretha Franklin, Jerry Butler, Carl Carlton, Billy Paul, George McCray, Shep & The Limelights, The Stylistics, New Birth, Martha Reeves, JJ Johnson, Three Dog Nights, The Dramatics, The Spinners, The Manhattans, and so many more

He then came to Europe with his uncle ‘Guitar Crusher’ for a sell out tour only then to team up with ‘Big Joe
Turner’s Memphis Blues Caravan’.

Vic also joined The Drifters in 2001 as a vocal member and performed worldwide for 7 years. As well as live and recording sessions, Vic had a lead role in the stage production ‘Big Time’ at the Talk Of London, Drury Lane in 1999.
He sang for the UK with Niki French in the Eurovision song contest in Sweden 2000. In 2017, Vic had the opportunity to be a part of the vocal ensemble choir for the soundtrack of the Grammy and Oscar winning, Marvel/Disney movie ‘Black Panther’.

Leo-B was brought up in South West London surrounded by an eclectic mix of music including Classical, Gospel, Funk, Pop & more. From a young age Leo has been playing keyboards and piano in church. During his mid teens to late 20’s Leo became Musical Director in two churches and played in several concerts featuring Gospel artists such as The Wades, amongst others. After being introduced to the recording studio environment, Leo’s love and appreciation of musical textures begun to present itself more creatively with the use of his own voice.

Since then he has been singing and dancing professionally for over 8 years and having recorded with Osibisa on a single with Sting, shared the R&B and Pop stages with the likes of Beverly Knight, Don- E. Omar, Junior Giscombe and more than FIVE former members of The Drifters, including Ray Lewis and Roy G Hemmings as a dancer, choreographer, backing and lead singer, Leo is now launching his solo career in the circuit of touring Motown and R&B entertainers with his 1-man show, Leo-B, The Soul of Motown & R&B.

With strong musical influences such greats as James Brown, Michael Jackson, Prince & Al Green, his performance radiates with a passionate conviction. Leo has also been nicknamed “The Pocket Rocket” because of his energetic dance choreography & fun personality.

Specially chosen songs for each (45, 60 and 75 minute) set, Leo fuses modern R&B based hits with a timeless collection of old Soul favourite classics.

Adding a dynamic awareness Leo delivers what both the clients and crowds want and ensures a fun and professional performance at every venue, every time!

Get Ready
The Way You Do The Things You Do
Stand By Me
Ain’t Too Proud To Beg
Since I Lost My Baby
Just My Imagination
Motown Medley
Cloud Nine
Papa Was A Rolling Stone
Signed, Sealed, Delivered
The Love I Lost
Higher & Higher
Treat Her Like A Lady
My First, My Last
Uptown Funk
My Girl
4 Tops Medley

”Such a 5 star experience, a true taste of classic Motown with a few modern numbers thrown in. Highly professional band to work with. I would highly recommend them every time”.

‘Masterpiece is the name to look out for, they never fail to entertain with their soulful voices, keeping me coming back for more and more. Fantastic tribute to the Temptations.”

”These guys are amazing, my friends and myself have been following them for a number of years. They are fantastic artists, true gentlemen and their charisma shines through in their performances’

”Wow!! What a great night we all had, the guys have the most amazing voices with the all the dance moves and all round entertainment provided. I can’t wait for the next show”.

”I’m very proud to consider myself a fan of Masterpiece because they truly represent the soul icons of yesteryear, their performances make a great tribute with quality vocals and style.

We don’t have to take breaks, we can keep going if necessary

Masterpiece Are Ideal For