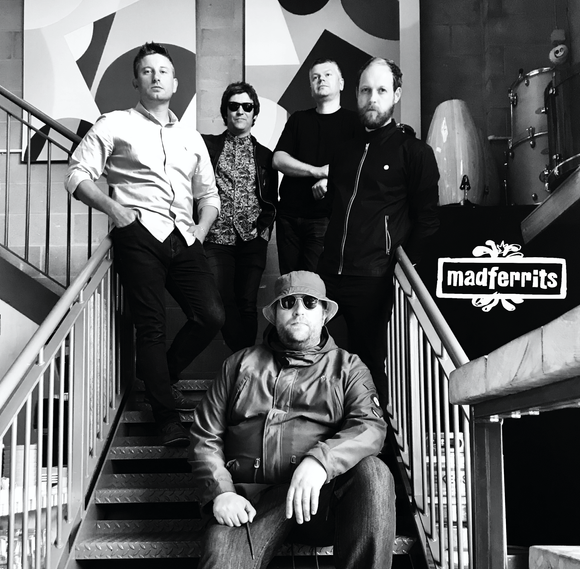 Madferrits how did they set up well…. Back in 1991, somewhere over the Pennines in deepest, darkest Lancashire, the band known as “Rain” evaporated into the ether and out of that residue, Oasis formed. Seven no.1 albums, 8 no.1 singles and 18 years later, the whirlwind that was Oasis, finally dwindled and died.
During this time, a silver cloud had formed and had transgressed the arduous journey over the Pennines, making its way to the holy ground of West Yorkshire. Here, the resulting cloudburst nourished the seeds of Rock ‘n’ Roll and as Spring, sprung, in early 2012, these precocious white roses began to blossom and formed Leeds’ first and Britains most authentic Oasis Tribute band – Madferrits.

Madferrits recreate the sights, sounds, atmosphere, and to some extent, the smells of Oasis to give the crowd what they want, which is a killer Oasis tribute, with enough decibels to leave your head ringing like a ghost train!
Despite Liam’s twitter rants, we head into the ‘20s with no sign of an Oasis reunion on the horizon, so until then, Madferrits are the closest thing you can get to seeing them live and to our knowledge, the only tribute to have performed live on stage with a real life Gallagher!

Whether you book Madferrits for a private event or a festival, Madferrits give their all; Playing all the right instruments, wearing all the right clothes, acting like the real thing, and will totally guarantee to give you a night of entertainment you will never forget!

Shock Of The Lightning

Good To Be Free

Go Let It Out

Stop Crying Your Heart Out

And that is just a few

‘Oasis’ were an English Rock/ Brit pop band formed in Manchester in 1991. Developed from an earlier group, the band originally consisted of the Gallagher brothers Liam and Noel. With the release of their debut album ‘Definitely Maybe’ in 1994, they continued to grow and the following year the band recorded ‘What’s the Story Morning Glory?’ and endured rivalry with the Britpop band ‘Blur’. They continued with the success until the bands split in 2009 when Noel quit. The band continued without Noel under the name Beady Eye. Songs from this Manchurian band include ‘Morning Glory’, ‘Wonder Wall’, ‘Don’t Look Back In Anger’ and ‘Half the World Away’ to name but a few.

Did you know that M8 have a great selection of Tribute Bands Check us out https://m8entertainments.com/category/popular-music-bands/tribute-bands

Great Tribute band – The best I have seen by far