Ian Lawton Is Ideal For 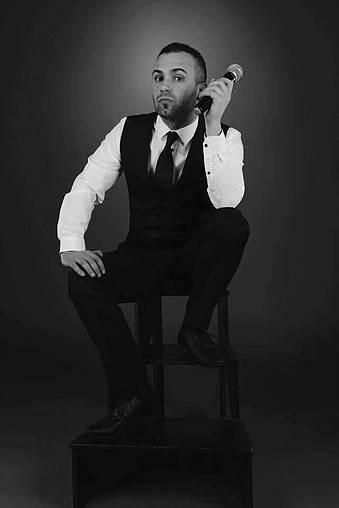 Ian Lawton is based in Greater Manchester and offers live music and DJ packages specifically devised for wedding receptions & other corporate functions throughout the UK.

What Ian Lawton had to say

I started writing songs and playing music quite late, at the age of 19. So there you go, it’s never too late to start! Before then I was stuck in dead end jobs and thought there’s got to more to life than this.

I’d always played around with words and poetry, but I wanted to completely express myself and learnt to play guitar, then later the piano. These decisions changed and shaped my life forever and eventually defined who I am as a person.

I met my best friend that first year, Dom, at music college and we started a band, Frame of Mind. Two years later we were touring Europe supporting ‘America’ encoring with them playing ‘Horse with no Name’. Absolute madness!

I had to pinch myself back then.

I did a lot with Frame of Mind. I learnt my trade most importantly, not to mention another two European tours with America, an Italian tour supporting ‘Chuck Berry’ had to be a highlight. Also, Pistoria Blues Festival with Jerry Lee Lewis, and winning a battle of the bands competition supporting ‘Status Quo’ in front of 10,000 people was pretty crazy.

A few years later I started a band called ‘1913’. We wrote some amazing songs together and signed a record deal with ‘Modern English’. We released a single ‘Atlantis’ with them and played with ‘White Lies’ & ‘Reverend & the Maker’.

Music has given me the chance to travel the world, especially the last few years, not to mention the people I’ve met and bonds I’ve made along the road. I’ll tell you one thing though, of all my musical accomplishments, there is no better feeling than being part of the biggest day of somebody’s life. Their Wedding!

I still find it an honour and a privilege to be a part of their day. As cheesy as it sounds it’s incredible, you can feel the love and the energy in the room, especially combined with music. I feel like I’m on a journey sometimes too; I’ve made some great friends out of what some people might think of as just another gig. But when you’ve helped be a part of the best day of somebody’s life, it is just the best feeling. I have to say I feel very lucky to do what I do.

The last 13 years have been an unbelievable roller coaster, here’s to another God knows how many years ahead…

Music can be provided for any occasion both formal and informal, across all genres. Ian can perform either with backing tracks, with or without a guitar. Weddings can be individually catered for all tastes as can corporate events and birthday functions. Please get in touch regarding packages available. If there is a particular song you want then Ian can learn it. Ian can also provide you with perfect background music for your occasion. Ian can provide a Singing Waiter Service and also performs in Care Homes. If you wish to book this amazing singer for your wedding just get in touch with our team on 07515789837.

Ian is a solo backing track artist and an acoustic singer

“WHEN IT COMES TO MUSIC, ESPECIALLY LIVE MUSIC, YOU WANT THE PEACE OF MIND THAT NOT ONLY THE SINGER CAN SING, BUT THAT THE AUDIENCE IS GOING TO BE TRULY ENGAGED BY THE PERSON BEHIND THE MIC. WHAT IAN DOES, EFFORTLESSLY, IS TAKE THE AUDIENCE ON A SUMPTUOUS MUSICAL JOURNEY, MAKING YOU FEEL COUNTLESS EMOTIONS, AS HIS PASSION IS THROWN INTO EVERY NOTE.”

Can Ian provide DJ Service at our Wedding?

What Equipment does Ian use?

Ian Lawton Is Ideal For