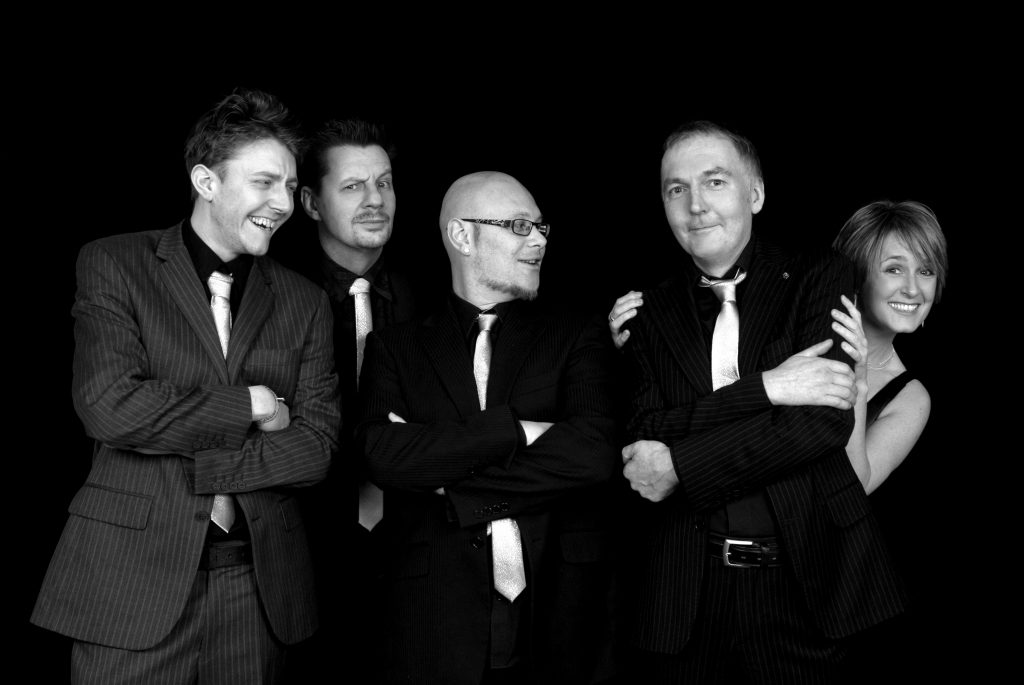 Higher Ground Is a funky talented 5 piece function band made up of vocals (1 female, 2 Male Backing), drums, bass guitar, keyboards, and guitar. Higher Ground! is an act consisting of musicians from all around Europe and whose experienced musicians have performed with Joclyn Brown, Basement Jaxx and supported comedy acts such as Justin lee Collins and Dawn French..  They have performed live at summer balls, corporate events, award ceremonies to name but a few.

Higher Ground’s repertoire consists of a diverse range of covers covering anything from Amy Winehouse to Dusty Springfield Abba to Earth Wind and Fire Maroon 5 to Stevie Wonder Nora Jones to Duffy. You can select from a variety of styles of music such as the swinging ’60s, Latin, Jazz, Disco, Soul, Motown, 80’s Pop or more recent dance floor hits. Higher Ground! also, perform a 70’s set if required.

LIGHTING AND SOUND Rest assured your evening will be a total success. Higher Ground! is an experienced professional band and will take care of both lighting and sound. At every event, Higher Ground! have a highly experienced sound engineer and perform with a high-quality PA and lighting system so there’s no need for you to hire one out. The BAND can also work alongside an experienced DJ if required. Higher Ground! The best in LIVE music.

Higher Ground! will always dress to suit the occasion, they take pride in how they look on and off stage. The band is happy to provide extravagant clothing to suit your every need or Higher Ground! can perform in black tie for your more formal corporate events

If your event requires a larger band e.g: with a brass section they are able to add to this line up or reduce it to a 3 or 4 piece band.

Mr. Big Stuff
War
Funky Stuff
One Nation under one Groove
Ain’t Nothing Like the Real Thing
Uptight
In the Midnight Hour
Gimmie some Lovin

“All went really well, Higher Ground were brilliant and everyone had a great time! ”

“Everything went very well. Everybody liked Higher Ground and they really made our day.”

“Many, many thanks for last night! The band were great, as you said they would be fab! ”

Sorry for not getting back earlier – honeymoon and all! I just wanted to thank you for the amazing gig you performed at my wedding. Sorry you had to come on so late, but when you did, it was amazing. We’re hoping to have a party in a year where we will be looking for a band to play so will definitely give you a shout. All the best, Micheala”

“I booked Higher Ground for my 30th birthday party. The band was absolutely brilliant. Heidi was fantastic with the crowd, they managed to keep the people on dancing floor from the first song to the very last one. I would like to say a huge thank Heidi and the band far making my evening one I shall not forget. I would definitely book the band again and recommend them to everyone. Many thanks Vendula.

How much space will your band need?

Do you have PA System and Public Liability Insurance?

How long does it take to set the band up?