Here's To Us Are Ideal For 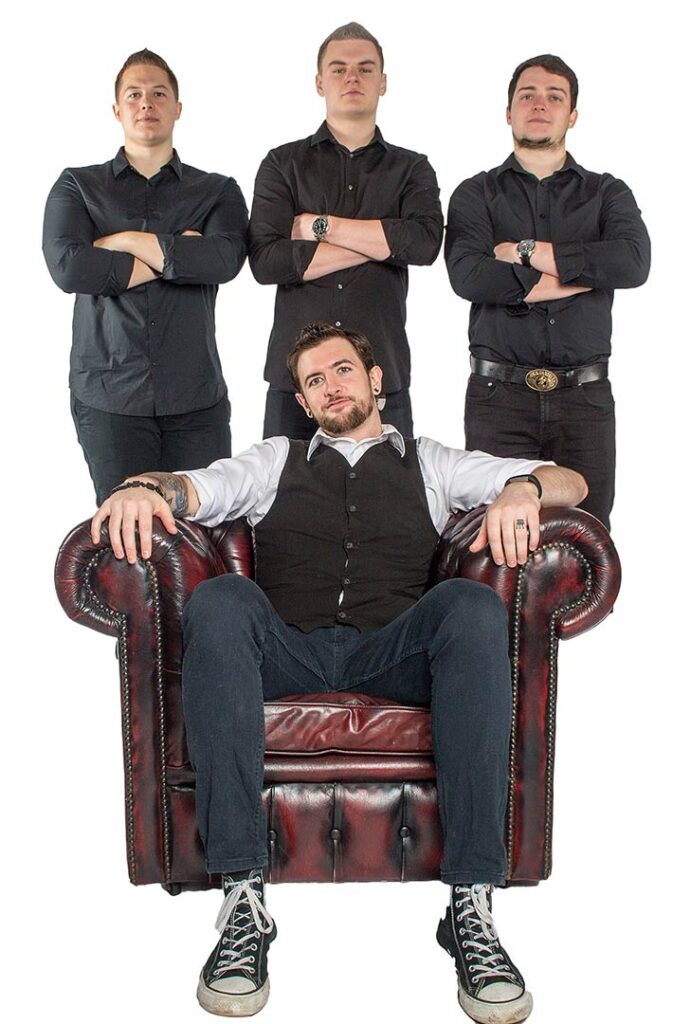 Here’s To Us are An amazing Pop, Indie and Rock Band Based in the North West. Perfect for Weddings And Corporate Events.

When it comes down to booking your wedding band, be excited about it. It’s your event and you deserve to have great memories and a special day.

Here’s To Us are An amazing Pop, Indie and Rock Band Based in the North West. Perfect for Weddings And Corporate Events.

Want confetti cannons? They have them!

So if you want to know just how much fun can be added to your event, get in touch with us here at M8 Entertainments. Here’s To Us will not disappoint !

Here’s to Us Are a Four Piece Band

Over 15 years experience as a Singer gigging with originals and function bands across the UK and USA – including at the World Famous Whisky A GO GO in LA.

He’s been a featured vocalist for artists like Grammy nominated and UK chart number 1 album toppers Bring Me The Horizon, Anavae, While She Sleeps, Brett Hestla and Rock Choir – “Choir Noir”. He’s worked with the majority of weddings and entertainment management companies, giving him years of experience in events for Weddings and Functions.

With one hell of a vocal range going from the bass notes of “Uptown Funk” to the heights of Freddie Mercury’s high notes he’s never let a crowd down yet.

Josh is the guitarist in Here’s to Us and has been playing guitar for 21 years since the age of 8 years old. Josh started performing at venues at the age of 14 and formed an original band which toured the uk and Europe supporting various bands and was lucky enough to play with Slash at the Hard Rock Cafe Manchester.

Since then he has spent his time teaching guitar, recording for session work including jingles, and performing in various function bands and tribute bands.

Josh formed Here’s to Us along with the other members of the band in 2017 and set out to form a function band that set itself apart from others with a focus on musicianship, and high energy shows tailored to clients needs that would help make the night special at any event.

Alex has been playing drums since the age of 13.

He has been lucky enough to play shows overseas supporting some big names in the industry.

Alex has spent much of his musical life on the function scene, having worked with several bands across multiple companies and bandleading.

Alex’s mantra: “if they ain’t dancing to my grooves, they must be at the bar”.

Matt has been playing bass professionally for more than 10 years.

He has played at several major festivals with multiple bands.

Matt has a degree in music and performance and says his proudest moment was supporting the band Chic at a festival. He has enjoyed teaching along the way but now more commonly found slapping the bass at functions across the Northwest.

Here’s to Us were amazing!! The music was brilliant and it really got the crowd going. They even played special requests.

We had here’s to us play at our wedding at Stirk House in Gisburn in November.

During the entire process, from the beginning of our correspondence nearly a year before the event to the end of the wedding reception, these guys were exceptionally professional and courteous. On top of that, they are extremely talented musicians.

Aaron who handles the bookings and correspondence, was always responsive and available to answer questions if needed in the months leading up to our big day, Big thanks to him!

The band played at our Evening reception (4-piece band), they played a wide variety of great songs and even did a few requests from our guests on the night that weren’t on their set list.

These guys!! the best wedding band I have seen. Their enthusiasm was and the atmosphere was superb.

Just wanted to say a massive thanks to the band for really making our wedding, they even dealt with the sound limiter.

Here’s To Us are only interested in providing you with the best entertainment for your event! Ensuring you are on your feet all night

Here's To Us Are Ideal For