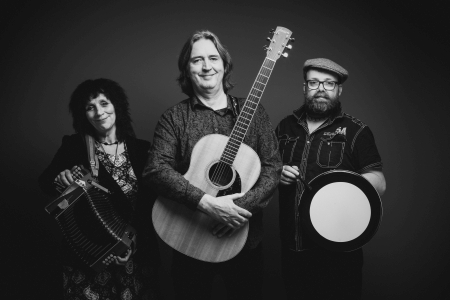 The go-to band for celebrity parties. For that genuine Irish sound, book the best Irish music for Weddings, Birthday Parties, Irish wakes, Festivals, and Corporate Events. Their  fiddle player can also call dance tunes such as strip the willow, the Gay Gordons and many more.

Whatever your age, and wherever you are from, you are warmly invited to an unforgettable Irish party. Henry Marten’s Ghost the only No1 Traditional Irish Band.

Greig Stewart drummer/percussionist is a founder member of the internationally renowned Guillemots and both a Brit Award and Mercury Music Prize nominee. Greig and Padraig became friends and musical collaborators in Oxford in 1997 before Greig moved to London to become a core member of the Guillemots. Greig was both Percussionist and co-writer helping the band enjoy significant single and album chart successes, and touring globally. Greig has appeared alongside the likes of Rufus Wainwright, Snow Patrol, KT Tunstall, The Script, Beck, Morrissey, REM, Travis and even with a full orchestra at the BBC Electric Proms. Re-united with Padraig in 2013, Grieg’s characteristically innovative style and fluid rhythms form the band’s heartbeat.

Gill O’ Shea Whistles/Accordion/Melodeon has a BA Honours Degree in Music from Cardiff University. She sports an infectious sense of fun. Coupled with a unique whistle style and a genuine affinity towards Irish tunes, she quickly became an audience favourite. An ever-present since 2002 she also plays squeezeboxes and was the band’s first female member. Living off the same Motorway junction as Padraig they also perform regularly as a duo.

Piotr Jordan Fiddle was born and brought up in Lodz, Poland and started playing the violin at age 6. He studied under the Irena Dubiska at the Warsaw Conservatoire, from where he graduated in 1986 at the age of 17. Upon graduating he worked in the Lodz National Opera. In 1994 he moved to the UK and has since played in numerous professional ensembles, including the Bampton Classical Opera and the London Schubert Players. As well as an accomplished orchestral and chamber musician, Piotr is well versed in improvisation and many folk styles, including Klezmer, various Balkan styles, and Irish music.

Had such a wonderful day. The band did us proud Jake Wood (Eastenders)

“You brought a lovely piece of Ireland to London” Jo Wood (Celebrity Island).

“A great Irish band that will rock any party” Robert Smith (the Cure).