Ed Is Ideal For 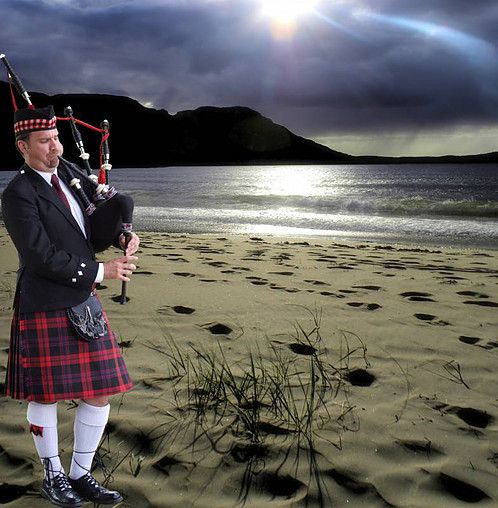 Ed is a professional bagpiper based in Sheffield, Yorkshire. Ed took up the bagpipes after being encouraged to do by his mother who is from Peterhead, Aberdeenshire. Nobody else in the Scottish side of the family played the bagpipes so he was to be the first! he always loved hearing the pipes as a child so I was very keen to learn.

He has now been playing for over 20 years and has performed at 1000’s of weddings, funerals, birthday parties, schools, colleges, sergeant’s messes, Remembrance Sunday, Burns Suppers, Hogmanay, etc. He has appeared on ITV programs’ The Lakes’ and also ‘The Dales’ playing at weddings featured on the shows. A few years ago he played at the Bollywood Awards at Sheffield Arena which was broadcast worldwide.

He can perform in Full No.1 Dress (feather bonnet, horsehair sporran, doublet, shoulder plaid, etc) or Traditional Formal Dress (Argyll Jacket, Shirt, Tie, Kilt, etc) .He has a choice of tartans including American Universal (No.1 or No.2 Dress), Royal Stuart, Mackenzie, Blakc Watch or my family tartan Brown.

As well as playing the Great Highland Bagpipes, he also has a beautiful set of bellow blown Fred Morrison Smallpipes which are suitable for playing indoors. They are very popular for playing during wedding ceremonies, ie the signing of the register

This Is What He Has To Say

A Lifetime of Bagpiping…

A professional bagpiper with over 25 years experience. Who began learning at the age of 11 after falling in love with the sound of the pipes whilst on holiday in Aberfeldy, Scotland. My mother being Scottish encouraged me to learn and asked a piper named Alec Maclean to teach me. Alec kindly dedicated much of his free time to teaching me and eventually introduced me to The Seaforth Highlanders, based in Mansfield.

Performing  with them for almost two years. This involved playing at weddings, carnivals and remembrance day parades. As my piping improved I craved new challenges so Alec introduced me to the Ashbourne Pipes and Drums band.  I competed and performed with them for several years in grades 3 and 4. In recent years I have been a prominent member of Manchester Phoenix Pipe Band and competed with the band at major championships. In 2016 and 2018 we won the All England Championships at Chatsworth.

I contacted Ed Arnold as I decided to hire a piper at the last minute to play at my grandsons wedding I realised that no family member had booked one and I being from Scotland and the groom and family members would be in full kilt dress including tartan trews so we had to have a piper ed rushed from one gig to ours and was there to pipe the groom and bride Michael and Kelly into there evening reception and stayed and piped a few more tunes I will certainly book ed again a very pleasant man. Thanks, Ed

Ed I wanted to say a proper thank you to you, sorry it has taken me a little while. You were a very important part of my dad’s day and did us proud. My dad would have loved to hear you. You were very powerful and played without fault, your music was beautiful! I know without a doubt I picked the best person to play for my dad. I couldn’t have picked anyone better and the comments we’ve had about you, well I wish you could have heard them all. I really hope I get to hear you play again one day, hopefully it will be for a happier reason. For anyone thinking of hiring Ed for their day, don’t think twice about it! He is the person for you! Thank you thank you thank you from the bottom of my heart, will never be forgotten …

Ed was punctual, kind and with charm and charisma. He played outside for my mother’s 93rd and a small crowd gathered, it was a hot summer evening and he made the atmosphere so happy and upbeat with his skilled playing and interpersonal skills.

Ed was  reasonable in price. He took the time to speak personally to my mother and ask her to choose a tune to play. Can’t recommend Ed highly enough.

Hi Ed just to say many many thanks for playing at my fathers funeral yesterday, it was just what the family and friends needed to help us through our sad day. The songs you played were bitter sweet but made us proud of our father and his heritage ! Thank you for your professionalism and courteousness and hope to see you again in happier circumstances …

We was very pleased with you . The music was incredible.The priest and the undertaker said that you were the best piper he had heard.The music that you played after dad was buried was beautiful. What was the tune? Thanks again it was such a fitting touch to dads funeral…

Got Ed in to attend a surprise birthday party for my mums 70th, Had my mum at the front of the stage as I was giving a speech and the wife was outside waiting for the cue to come in with Ed playing the pipes, when it was time we opened the door and in he walked tunes blaring out, my mums face was priceless, she welled up and had hand over mouth, it worked she had no idea and loved it, I must say thank you Ed as this made my mums night. On the booking side of things it was really easy, fantastic communication, arrived on time etc, can not fault anything at all. Again, thanks Ed and if at all needed we will definitely be contacting you again…

Hi Ed. Further to my text on the evening of my Dad\’s funeral in Derbyshire, I wanted to write something for your page to the the effect that what you did for us on 20th February took the ceremony to a new level. You were such a pro, the tune you played was just right and the McKenzie tartan had all of us in goosebumps as you can imagine. Everyone said what a great send off it was for my Dad and it was you who started it all! As you can imagine, I was a bit nervous about picking someone off the internet (as you may recall, I originally had friend lined up for the gig) but I can assure assure anyone who has any doubts that you really are the man for the job. Your communications were also perfect, reassuring me that you\’d arrived in good time etc etc.
Thanks again Ed and big up…

I rang Ed two weeks before my wedding date to ask if he could possibly play as a  present for my dad who loves the bagpipes, after reading all Ed’ s feedback from his website I wasn’t at all surprised he was booked on that day. After explaining that I didn’t want Ed to play all day and that I would just like him to play for a while in the evening, Ed arranged that he would book me in after the wedding he was already booked for but he would have some traveling to do to get to us so we arranged a time for him to start. Ed knowing that this was a surprise for my dad turned up at my venue and rang me to let me know he had arrived so my dad didn’t see him, while Ed got himself ready I announced to my guests that we had a bagpiper to play for my dad… well my dads face dropped. Ed came in playing and stood in front of my dad and played for him. It was the most incredible thing I have ever seen. My dad was in amazement to be honest, as I looked round the room so to were the rest of my guests. My dad was so thrilled by Ed playing the bagpipes he had a tear in his eye thus setting everyone else off. Ed was fantastic with all my guests answering Any questions anyone had and playing all the requests my guests asked for. I can honestly say everyone of my guests genuinely enjoyed Eds performance as they all got up for a dance. I did try having a cheeky turn on the pipes thinking to myself ‘how hard can this be’, well talk about showing myself up I couldn’t even get a tiny sound out of it ha ha, but this did just added to the fun of the day. I  would have no worries in recommending Ed to anyone. Thank you very much Ed for playing at my wedding you are a really nice guy with an enormous talent once again Thank you you made our day.

Some of the public events Includes.

Can I Hire Ed for our Burns Night?

What areas does Ed Cover?

Package includes being available for the full day, from greeting guests pre-ceremony, to piping the happy couple to the top table .

If playing at a church funeral it is tradition for the bagpiper to lead the coffin either to the church doors, allowing the organist (or recorded music) to take over as the casket is carried to the front and placed on the bier. Alternatively, the  piper leads the casket to the front of the church and play until everyone is seated.

At the end of the service it is tradition for the piper to lead the coffin out of the church or begin playing from the church doors and lead to the hearse.

Traditionally the piper meets the funeral cortege at the crematorium gates (or several hundred yards from the  chapel) and leads the cortege to the chapel playing a slow march / retreat. The piper may then be required to play as the coffin is carried into the crematorium and again at the end of the service as people gather outside.

Ed Is Ideal For