Definitely Oasis Are Ideal For 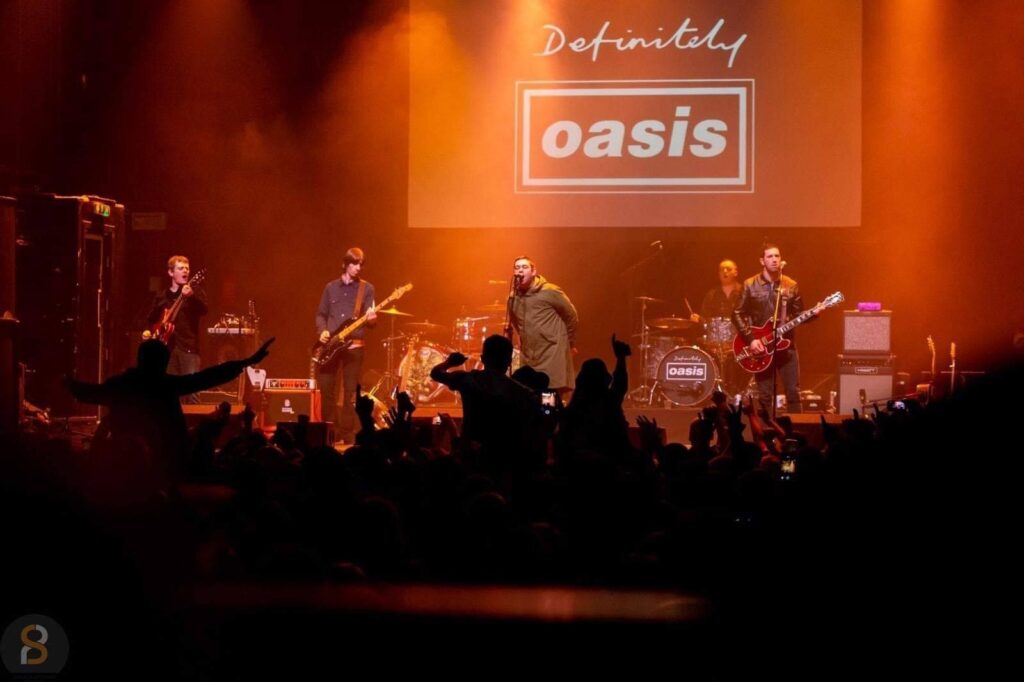 Definitely Oasis are regarded by many Oasis fans and promoters alike as the best Oasis tribute band there is!

Everything the band does is all about what the fans want to see and hear a lot of hard work goes on in the background making sure that the look and sound are bang on so much so that the band played a sold-out show at the iconic barrowland’s venue in 2016 a venue loved by both Liam & Noel Gallagher and where Oasis played arguably some of their finest ever shows including the 10 years of noise confusion  gig that was shown live on Sky Box Office in 2001 another first for an Oasis tribute band proves why they are the best Oasis tribute in the Business.

The band also recently sold out their own headline show at O2 Academy Glasgow to over two and a half thousand people in 2018 & 19 and it shows just how highly the band are now regarded amongst Oasis fans.

Over the years the band’s stature has grown and seen them perform not in just the UK but across Europe and even the Middle East with a tour of Australia and New Zealand on the way as well.

With the real Oasis on an extended break at the moment, This is definitely the next best thing

Definitely Oasis do an amazing job of keeping the music alive and set the bar high by re-creating the look, sound and feel of an Oasis gig that fans come to expect and are also the only Oasis tribute that have both a Liam and Noel sound-alikes.

Turn Up The Sun, Morning Glory, Columbia Shakermaker, Bring It On Down, Slide Away, Four Letter Word, She’s Electric, Lyla, Some Might Say, Supersonic, Roll With It, Whatever, Wonderwall, Meaning Of Soul, Rock N Roll Star, Live Forever, My Generation, Talk Tonight, Half The World Away, Lock All The Doors, Don’t Look Back In Anger, Champagne Supernova and Cigarettes & Alcohol.

Saw majority of the Oasis tribute bands in the country (7 different ones) multiple times this year and these lads really are the real deal. Honestly by far the best in the business by an absolute mile! Brilliant!

Second time I’ve seen the band and they are by far the best tribute band I’ve seen!!! These lads are the closest thing you will get to the real deal! Amazing!!

Definitely go and see these boys power through the back catalogue of banging tunes Great front man backed up by excellent musicians. I watched them with my 11 year old son . He was mesmerised by the performance. He may never witness oasis but he definitely witnessed the sound at full pace . Well done boys . Thank you and keep up the good work. Best wishes from Andy and Harry

Absolutely fantastic. A must see for any Oasis fan. Sound like them and can rock like them. A fantastic playlist from start to finish.

Over the years the bands stature has grown and seem them perform not just in the UK but across Europe and even the Middle East, The band regularly sell out top class venues across the UK in advance including venues like.. O2 Academy Islington, O2 Academy Glasgow,  Factory Manchester,  Thekla Bristol, The Rescue Rooms Nottingham, Liquid Rooms Edinburgh,  The Live Rooms Chester & The Brickyard in Carlisle to name but a few

Yes, not a problem at all, if a larger PA System is needed  M8 will include it in the price

Depending on the event, normal performance time is 2 x 45mins

Definitely Oasis Are Ideal For