Captain Jack Sparrow.. The Best In The UK

Jack Sparrow Lookalike Is Ideal For 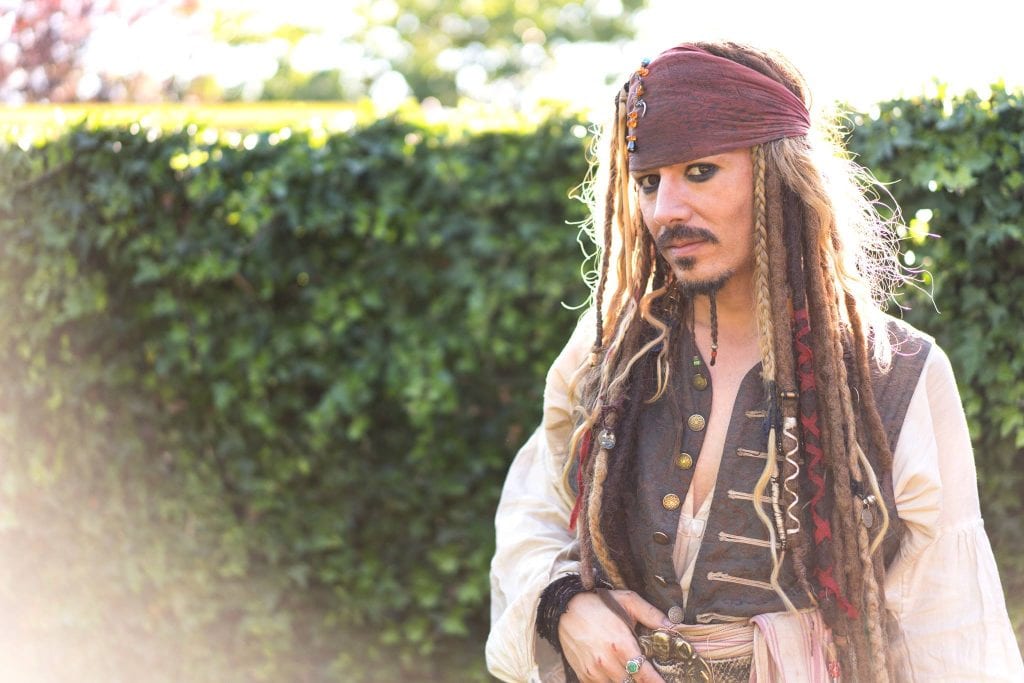 Captain Jack Sparrow.. The Best In The UK

Simon as Captain Jack Sparrow  is the only person to be credited as Johnny Depp’s photo double for the UK filming of Pirates of the Caribbean: On Stranger Tides.  Not only is Simon lucky enough to pass for Johnny Depp in looks, but he is also the same size as the Hollywood star from his height down to his hand size.  So when you are watching the film you never know when you might be catching a glimpse of Simon himself. Mind-blowing on how much he looks like Johnny Depp don’t you think.

Simon as Captain Jack Sparrow has spent many thousands of pounds and countless months of painstaking research to make sure that every aspect of his costumes are as close to the originals as possible – not only the right fabrics, designs, and details, but making those look suitably aged and broken down.  Ask yourself would you really want to hire someone who is wearing something you can just buy from a fancy dress shop?

Being such a unique character, you often see impersonators come up with a very over the top caricature-like Captain Jack Sparrow.  Simon makes his characterisation as real to life as possible, as if Johnny Depp has walked off the film set.

Absolutely Fantastic! Capt. Jack really got involved with our business, answering the phone, welcoming customers, he was hilarious and our customers thoroughly loved him! We took so many photos and videos, nothing was too much trouble and we literally laughed from start to finish. Not only does Jack look, sound and act just like he’s stepped off the film set, the sense of humour and the willingness to get involved with anything and everything was outstanding. What an absolute pleasure to have Capt. Jack at our business and send our sincere thanks and best wishes and hope to see him again soon! and don’t worry he is brilliant he won’t let your children and customers down.

Jack was excellent and made every effort to interact with all the guests. Great feedback received and would not hesitate to book him again. Guaranteed to give you a great performance. Totally Reliable.  The children thought he was amazing and they all recognized him !

Brilliant – very engaging, cheeky, funny and all round perfect Jack Sparrow. We would definitely look to work with you again in the future, and hope that we can do so.

Simon came to my sons 5th Birthday party …a very keen Pirate of the Caribbean fan , he was overwhelmed with Capt Jack Sparrows visit! Simon worked so well with the kid’s entertainer, despite having just met her …it was a great party for both the adults & Kids. A master of his craft, Simon looks & sounds just like Mr. Depp & and if that’s not enough he was a thoroughly nice bloke to book… super easy to liaise with. Thank you Simon x

He has appeared at events all over the world for some of the most well known companies in the country including, Alton Towers, Admiral Insurance, ASDA, BT, Cineworld, Cola Cola DSGi (Dixons Group), Hard Rock Cafe,  Lloyds TSB, Orange, Time Warner as well as appearing in HEAT magazine, on BBC1, CBBC, Channel 4 and Sky Living.

Jack Sparrow Lookalike Is Ideal For