Abba Chique Is Ideal For 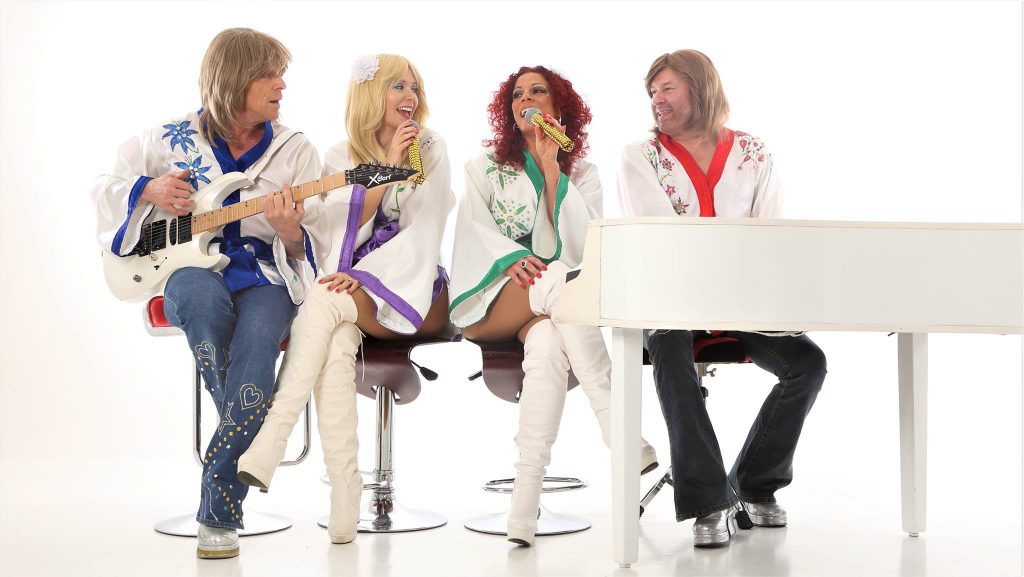 ABBA Chique, the hottest and most sought after ABBA tribute band, based in Kent, UK.

Established in 2009, ABBA tribute band – ABBA Chique have since become one of the most sought after tributes in the country, performing sell-out shows all over the UK and abroad.

Made up of pro musicians with a wealth of experience in the business, the band pride themselves on their authentic ABBA sound and look, providing a professional, polished show, popular with all ages of audiences.

All the glamour & glitz of a real ABBA concert, with stunning costumes, made with attention to detail of ABBA’s original designs, and a powerful stage presence full of energy and fun, you’ll feel as if you were back in the 1970’s.

Ainsley’s career in music began in 2002, working as a solo singer in local pubs and clubs.

Five years later, after joining a band, she met guitarist, Perry, who suggested they start an ABBA tribute and the two of them worked tirelessly to replicate ABBA’s sound and look, designing and making costumes, and listening to ABBA songs over and over to that perfet ABBA sound.

In 2009, after months of preparation they advertised for an Agnetha and after meeting Leanna, ABBA Chique formed from there.

ABBA – obsessed Ainsley adds that personal touch to ABBA Chique by managing the band, she also edits the band videos and promotional photos, as well as performing as Frida.

After graduating with a Musical Theatre Diploma in 2009, Georgie’s first job as lead vocalist/dancer saw her touring Crete for 6 months with  ‘Around the world” show.

Georgie then started work on cruise ships; as part of the show team on the Fred Olson’s ‘Braemar’ and 2 contracts as Dance Captain on the ‘Saga Sapphire.’

Georgie has danced for One Direction and Duffy, and been on TV, in EastEnders, Holby city & Silent Witness. Georgie knew she wanted to be in an ABBA band and after one look on ABBA Chique’s website, her mind was set!  Since taking over from Leanna as

ABBA Chique’s full-time Agnetha, she can’t wait for her exciting future with the band!!

After many years of playing the guitar for various bands, Perry is a true rock God!

“He is a fantastic guitarist and a real credit to the show,” says the band leader Ainsley.

Over the years Perry has worked in various other bands, including two ABBA tribute bands.
He run his own glam rock bands, country & western band and punk band and plays he the ‘Bjorn’ part perfectly.

He’s also a dab hand with a sewing machine and painstakingly made all the band’s stage costumes himself!

Perry enjoys writing and recording his own music;  he recently wrote a country song with ABBA Chique’s Ainsley which was played on BBC radio.

Paul is a born musician – and enjoys every minute of it! Over the years he has played in various bands and ensembles, travelling up and down the country.

Paul writes and produces his own music – really getting into the spirit of Benny Andersson!

During the day he teaches piano and keyboard skills in local schools.

His passion for music is also matched for his interest in Tai Chi and other healthy living practices.

Jim Ferris studied drumming at the Coventry School of Music and had already performed at the Royal Albert Hall London, by the age of 16.

During a varied career, Jim has spent 15 years backing TV artistes in cabaret, 20 years and four albums with a Jazz Big Band and alongside all of that, 27 years as a professional drum kit tutor!

Despite all of this variety of work, Jim cites his gigs with ABBA Chique “as some of the happiest times of my career.”

“as some of the happiest times of my career.”

Having happily lived on the East Devon coast for 36 years, Jim moved to ‘pastures new’ in rural Norfolk during 2016.

Performing their great songs such as Dancing Queen, Gimme! Gimme! Gimme!, Chiquitita, The Winnder Takes It All, Take A Chance On Me, Money, Money, Money, Knowing Me, Knowing You, Lay All Your Love On Me, Fernando, Super Trouper, Does Your Mother Know, Waterloo, S.O.S, The Day Before You Came, Voulez-Vous, I Have A Dream, I Do I Do I Do I Do I Do, The Name Of The Game, Honey, Honey, One Of Us, The Way Old Friends Do, Thank you For The Music, Angeleyes, So Long, Eagle, Why Did It Have To Be Me

Booked this excellent band to play at our Oxfordshire venue The Northcourt. They were a pleasure to work with and professional at all time. The performance had the audience enthralled and I would not hesitate to recommend them to any venue or persons. I will be re-booking.

Abba Chique Is Ideal For